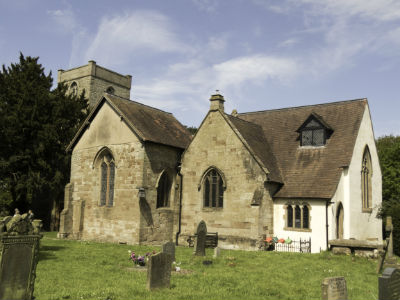 St Peter's is bounded not only by a peaceful churchyard, but playing fields and the Lido park. It is the home of St Peter's Pre-school and is close to St Peter's First School.

Although there was a Saxon church on the site, no traces of it now remain. The current building does, however, still retain parts of the Norman building, of which the chancel arch provides a fine example of its type. The church was extended in the 12th century with a south aisle, later truncated to a south transept, which is now a Lady chapel. The south east window contains a very old example of stained glass work. The north transept was added in the 14th century.

The nave was later drastically altered in the time of Henry VII, and a new roof put on, which fits through a rather odd but fine half-timbered clerestory.

The tower was built in 1500AD, although the west doorway was cut later. St Peter's has a peal of six bells, and three of these are of considerable age. There is no ringing chamber, but ringers stand in the space uder the tower at the back of the church.

Perhaps the most signifcant memorial in the church, which draws visitors especially from the United States, is that to Edward Winslow, born in St Peter's parish in 1595, and one of the Pilgrim Fathers who sailed on the Mayflower. He served three times as governor of the Plymouth colony, and brought the first domestic cattle to America. The detail to the left is a from a portrait by an anonymous London artist, painted in 1651. It is the only portrait of any of the Pilgrim Fathers actually painted from life. The vestry built onto the church in 1973 was dedicated to his memory.